Play Back Talk Back #1 by TAAK: Post Carnival of the Oppressed Feelings

Play Back Talk Back #1

Settling in a new country requires a lot of perseverance, but after (sometimes years) of oppression, refugees often show a great deal of resilience. Oppressed energy makes way for new expectations for the future and the willpower to build a new life. But does our current society encourage or frustrate this vitality? When does someone stop being a refugee and are they free to realize their potential? And how can art play a role in stimulating this potential?

On Thursday December 14, we invite everybody to come to the Tolhuistuin to discuss this subject. The debate is inspired by the Carnival of the Oppressed Feelings, and prior to this, the 5 Day Program.

About the Carnival of the Oppressed Feelings
On Saturday October 28, during the Carnival of the Oppressed Feelings people marched from the Bijlmerbajes to Dam square, thus uniting refugees, artists, organizations and anyone interested. With this performative demonstration, Russian artist Gluklya (Natalia Pershina-Yakimanskaya), in co-operation with TAAK, wanted to make a statement to welcome refugees, but also give them a face and a voice in the public domain. The costumes, especially made for the carnival, expressed the fears and frustrations newcomers experience in a strange country while the carnival itself served as an outlet for oppressed emotions.

On December 14, the film made about this event will be shown, followed by a Q&A with the artist. Next, several experts will formulate a statement and invite the audience to participate in a debate.

If you want to sign up, please send an e-mail to: info@taak.me, or sign up at the Facebookevent. Entrance is free.

More about our guests:

Maral Noshad Sharifi (moderator) works at the foreign desk of NRC, a Dutch national newspaper, where she covers Western Europe. In the past few years she has been writing about the situation of refugees in Greece, Germany, Sweden and Denmark. In 2016 she made the documentary Lieve Buren for Dutch tv about her family and how they were welcomed in the Netherlands shortly after they fled from Iran. https://www.npo.nl/3lab-lieve-buren/25-08-2016/VPWON_1259638

Charles Esche is director of Van Abbemuseum, Eindhoven; professor of contemporary art and curating at Central Saint Martins, London and co-director of Afterall Journal and Books. He teaches on the Exhibition Studies MRes course at CSM, and at Jan van Eyck Academie, Maastricht. Outwith the museum, he (co) curated Le Musée Égaré, Kunsthall Oslo 2017 and Printemps de Septembre, Toulouse 2016; Jakarta Biennale 2015; 31st Sao Paulo Bienal, 2014, U3 Triennale, Ljubljana, 2011; RIWAQ Biennale, Palestine, 2007 and 2009; Istanbul Biennale, 2005; Gwangju Biennale, 2002 amongst other international exhibitions. He is chair of CASCO, Utrecht. He received the 2012 Princess Margriet Award and the 2014 CCS Bard College Prize for Curatorial Excellence. According to Esche, art can contribute to social issues: ‘Art can help to define the Dutch identity. The question is not, who we are, but who we want to be. So, there is a choice. That is something we have to investigate. Art has something to say, it can change people. If we can reach out to a small but enthusiastic group, the process will start. Art has a long term effect, we need to be patient. It’s all about hospitality, openness and possibilities. Quote from: www.bureaudehelling.nl/

Erik Hagoort works as a researcher, artist, teacher and curator. He teaches at the Academie St. Joost in Den Bosch and a the Royal Academy of Fine Arts in Antwerp. At the moment he is working on a PhD in contemporary art. He regularly participates in workshops and performances organized by Gluklya. About these experiences, he often publishes articles. www.erikhagoort.nl

Ehsan Fardjadniya (1980) is a Kurdish-Iranian-Dutch artist. He holds a Bachelor from the Royal Academy of Arts in The Hague and a Master from Goldsmiths University in London. He works in the fields of participation art, interventions in public space, performances, video art and experimental film. Because of his artistic and activist practices, he had to flee from Iran in 2000. Since then he lives and works in Amsterdam and Londen.

This program was made possible with the support of the Mondriaan Fonds and the Amsterdams Fonds voor de Kunst. 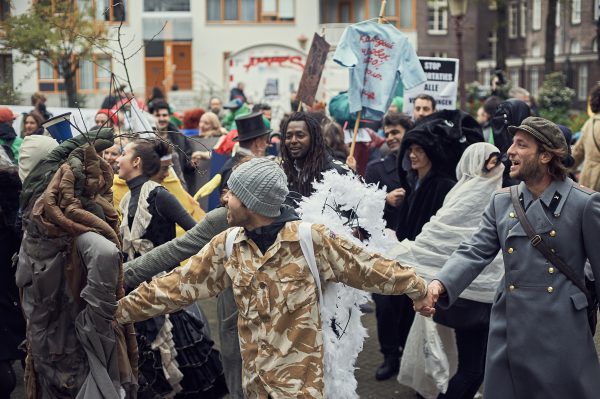