Report from Prison. An Unusual Round Table Discussion

The Russian artist Gluklya is currently renting a studio at the former prison Bijlmer Bajes, in the part of the building which is now called Lola Lik. There, she is working on establishing a collaboration with the refugee community at the temporary Center for Asylum Seekers 'AZC Wenckebachweg'. For her performance at Framer Framed on 29 March 2017, Gluklya invited refugees and newcomers from Syria and Africa as well as several experts from the art scene for an unusual round table talk.

Since August 2016, refugees are being accommodated at the former Bijlmer Bajes by the Dutch government, where they are waiting and hoping for the necessary documents and a house to live in. Until then, they are prisoners, Gluklya notices. She sees how large groups of people who were forced to migrate, now must deal with all kinds of rules and sophisticated bureaucratic rituals. Some of them are sad and devastated, often ill and crying; some of them lost everything. Some of them are less devastated; more joyful, eager to start a new life, for example through new work or study. The newcomers are waiting endlessly; frustrated, tired, anxious. But also: dreamy, joyful and hopeful about a new life in The Netherlands. Gluklya has started a new long term project with these migrants, exploring what role art and culture can play in the progress of integration.  The project is called the Utopian Unemployment Union of Amsterdam-Language of Fragility. Over the course of this year, Gluklya is organizing workshops and performances at Lola Lik with refugees from the Center for Asylum Seekers. At the end of 2017, the project will conclude with the Protest Carnival of the Oppressed Feelings.

The performance at Framer Framed on 29 March is the result of a challenging process of establishing a first dialogue with refugees, overcoming an important obstacle: the maze of bureaucratic rules and laws of the state. The stories of the refugees will be told by artists and the artists’ stories by refugees. Nobody is thus portraying themselves completely. Mirjam Westen, the moderator, will be the only one who never will wear a mask.

Background information:
The Utopian Unemployment Union of Amsterdam is a yearlong project that brings migrants, artists and institutions together in the united aim of developing a pilot model for a new type of project that exists at the junction of art, economics, progressive pedagogy and the social sciences. The goals of the project are to research new methods for using art in everyday life; and discovering a poetic outlook on integrating newly-arrived refugees into the European Community. Gluklya: “There’s also the small hope that they might become if not an artist, at least not a person ignorant of contemporary art and thought in general.”

See also attachment for the artist's statement about Language of Fragility in Arabic and English.

About the artist:
Gluklya (Natalya Pershina-Yakimanskaya) lives and works in Amsterdam and St. Petersburg. Considered as one of the pioneers of Russian Performance she co-founded the artist collective The Factory of Found Clothes (FFC) and Chto delat group. In 2012, the FFC was reformulated to the Utopian Unemployment Union, a project uniting art, social science, and progressive pedagogy that gives people from different social backgrounds the opportunity to make art together. Gluklya’s work has been exhibited in Russia and abroad in numerous groups shows as well as solo shows, including Wings of Migrants, Gallery Akinci, Amsterdam (2012): Utopian Unions, MMOMA, Moscow (2013); Reflecting Fashion, MUMOK Vienna, (2013); Dump Dreams, Shedhalle Zürich, (2013); Debates on Division: When the Private Becomes Public, Manifesta 10, Public Program, St. Petersburg (2014); Hero Mother, Berlin (2016); Feminism is Politics, Pratt Institute, NY (2016). Her Clothes for Demonstration Against False Election of Vladimir Putin was part of the 56th Venice Biennale of Art, All the World’s Futures, curated by Okwui Enwezor (2015). In 2014, Gluklya was the recipient of a fellowship in visual art awarded by The Joseph Brodsky Memorial Fund.

This project is made possible by: Mondriaan Fonds, Framer Framed, Refugee Company 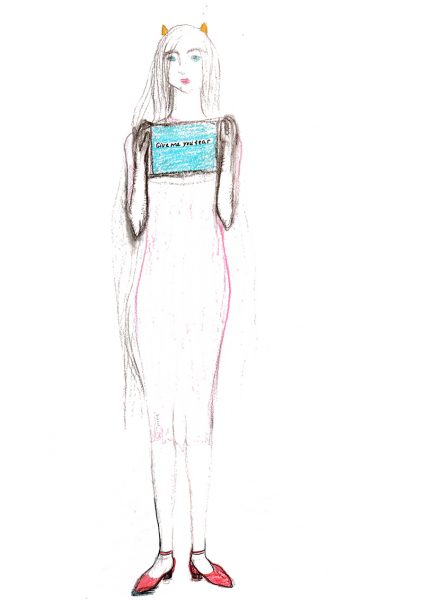