Sisyphos is building a new city

What is power? The people of today would seem to be the most powerful beings that have ever existed in this world. They have supplanted the entire planet: by now, there is more matter that has been shaped by humans than biomass. The grand total of human-made objects – for example buildings, streets, and bridges, but also plastic bottles, toothbrushes, and radios – outweighs the mass of all living things, of all animals and plants currently existing on earth. Power reminds me of Sisyphos, a story that even today has much to tell – if it is interpreted anew.

In the classical narrative of Greek mythology, Sisyphos is carrying a heavy rock up a mountain, which, having reached the summit, promptly tumbles back down. The meaningless chore never ends. Sisyphos had received it as punishment, because he did not want to die, and so had attempted several times to fool the gods.

It all began thus: when Thanatos, the Greek god of death, tries to take him into the realm of the dead, Sisyphos gets him drunk and ties him up. Now Thanatos can escort neither him nor anyone else out of this life – death is out of service. Sisyphos remains among the living. But the effect of this ruse does not last long, for Ares, Greek god of war, cannot do without dying. Without death, wars would not conclude, but must continue forever. So Ares liberates Thanatos, and personally escorts Sisyphos into the land of the dead.

But once more Sisyphos resorts to a ruse. In the very last moment before Ares bears him into the realm of death, Sisyphos begs his wife to not offer the traditional burial sacrifice for him, under any circumstances. But in Ancient Greece, one cannot be dead without a burial sacrifice. Thus Sisyphos turns to Hades, god of the netherworld, to request leave for a short trip back to life, that he may put in order this regrettable situation. Leave is granted. Yet rather than attending to his burial sacrifice, Sisyphos goes to enjoy life among the living. This state of affairs however is not to last. Sisyphos must once more return to the land of the dead, where he receives his sentence.

Sisyphos was not just anyone, he was a king – and he was the founder of the city of Corinth. And maybe this is his actual crime. Maybe he was not punished by the gods for refusing to die, but for founding a city. For the city is the place of emancipation, of humanity’s ongoing attempt at self-liberation. Here, sciences and arts flourished for the first time; here, the idea of democracy was born, and here, in the city, enlightenment unfolded. The city had always been a splinter in the eye of the gods – they knew it was here they would die.

Today, the majority of people live in cities, and according to forecasts by the United Nations, the cities will keep growing and ever more people will be dwelling in those cities. In Germany, almost 80% of the population live in cities, in the Netherlands, 92%, in Belgium, 98%. Eventually, “city” will be the exclusive habitat for all people – and in this habitat completely shaped by humans, there will be even less space for gods than is left today.

But the desires and dreams linked to the concept of the city have not been fulfilled today – the capitalist city produces global injustice, poverty, and powerlessness. “We’re still working on it”, one might call out to Sisyphos, if he is indeed still carrying that stone up the mountain in the realm of the dead.

According to French philosopher Albert Camus, Sisyphos is no victim, no forced-labor prisoner, but rather a quite normal human who is facing his sentence with defiance. Sisyphos demonstrates to the gods that the sentence is not punishment for him.

For Camus, the sentence which has befallen Sisyphos is a parable for the human condition: the task of Sisyphos signifies the vain quest of humankind for meaning and truth in a meaningless and indifferent universe. To me, this conception is a tad unsatisfactory. I want to change the world, not endure the status quo. In the Winkelmann-Museum in Stendal, a small town in Saxony-Anhalt, hangs the painting “Escape of Sisyphos” by Wolfgang Mattheuer, it was created in 1972.  The painting shows a young man running away from the stone. The gods are dead, they hold no more power over him. He no longer bows to the will of the gods, and thus ends his powerlessness.

The city is the starting point for my tale of Sisyphos. The first permanent settlements, which today we would call cities, evolved during the transition from the hunter-gatherer existence to farming and animal husbandry. With the founding of the cities, more complex organisational structures emerged which rested on hierarchy and power. Those who store their harvest must necessarily protect it, and therefore must create structures that can guarantee safety. In addition to walls, that is to say city walls that delimit, structure and protect the city, this implies first and foremost warriors who can defend the city against any invaders. The strongest or smartest warrior assumes power over everyone else, he becomes king – just like Sisyphos, the king of Corinth.

Enter the mountain. Those in power strive to symbolically display and factually preserve their position. Hence they like to dwell as high up as possible, above others, outranking them, but also with the best view, from where the appearance of a potential adversary may be spotted early. The king builds his house on a mountain top, high above the rest.

But whence comes the mountain? For that, the Czech-Brasilian philosopher Vilém Flusser offers some considerations which may be condensed to a history of civilisation and the meaning of “city”. According to Flusser, it is a defining feature of culture that anything it brings forth shall turn into garbage at some point. The mountain that secures the power of the ruler is in fact a garbage dump. The ruler builds his castle on the rubbish of civilisation. This mountain of garbage is both physical and metaphorical. I had remarked earlier that today there is more human-shaped matter than biomass on earth; and all this shaped matter, the smartphones, the aluminum drinking bottles and high-speed trains, are instrumental in sustaining the system, or, to stay within the archaic metaphor, in helping the ruler stay in power. The more power he has, the more the city must produce. And the more the city produces, the more consumer goods are made, which rapidly turn into garbage that has to be dumped somewhere. Thus emerges a mountain of food waste, cheap clothing, broken cars etc. Being enthroned on the garbage dump does not only distinguish the ruler symbolically as the keeper of prosperity, but serves a practical purpose as well. The higher the mountain grows, the farther the ruler’s gaze will reach, to sight the approaching enemies early, to take defensive measures:  the more garbage, the safer everyone may live, such is the promise. In the history of city development, the mountain represented a position of military and strategic advantage. Today, the mountain is made from the metadata of our virtual shopping sprees and our effusions on social media: pieces of information that provide a view over our thoughts, feelings, and future behavior.

Accumulate and condense – such is the logic of growth. Following this metaphor, and within the growth logic of urban societies, the labor of Sisyphos is not meaningless. With the heavy rock he is pushing up the mountain, he compacts the garbage and creates as solid as possible a foundation for ever more growth. The compaction will make the mountain smaller at first, but also more sound, more durable. He contributes to the stabilisation of the system he himself has created but, having been banished to the realm of the dead, may no longer partake in.

Rock and the other city

The fascination of the story of Sisyphos lies in the fact that even today, so many people can recognize themselves in it. Many people can picture an act of doing something arduous that does not really make sense, but serves to secure one’s privileges. Every human is Sisyphos. Therefore I imagine that everyone is their own rock that they are meant to push up the mountain, and they must never give up. When one is the rock itself that one pushes up the mountain, one cannot just run away like Wolfgang Mattheuer’s Sisyphos. When the rock is one’s self, it becomes evident why Sisyphos cannot rebel against the punishment. Yet it is possible to question the mountain. For the mountain does not simply exist – the mountain is being made by people, by everyone of us. And it will become higher, every day, if the people carry on as usual. Worse yet: each time one pushes the heavy rock up the mountain, one compacts it, makes it ever more sound, stable, immovable.

Thus one contributes to the foundations of the city, a city which creates a hierarchy that renders us unfree, powerless, maybe even unconscious. But we had hoped for something better from the city, namely enlightenment, emancipation, freedom. How would a city be built today, if one wanted to found a better one? It would be a city that is not built on garbage, a city that is a cycle of material. It is not a gluttonous organism that devours people and material to forever spew out more garbage, to elevate the mountain where the rulers live beyond any measure. It is a city without a mountain, hence without power, hierarchy, dominion, in which democracy in the sense of equality, solidarity and participation becomes reality. To build this city, we have to clear the garbage mountain, bit by bit. 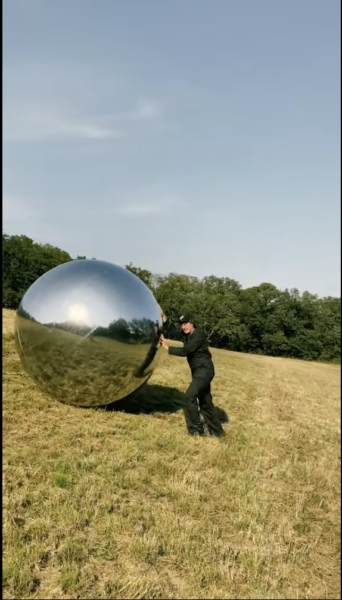