The School of Narrative Dance in Amsterdam

Under the extraordinary circumstances of the covid-19 pandemic, artist Marinella Senatore brought The School of Narrative Dance to Amsterdam, at TAAK’s invitation.

Please scroll down to check out the film.

For this edition, TAAK and Senatore invited Amsterdam residents to join her in reflecting upon the ‘new normal’: what are its social consequences, can we establish (new) connections together, what is the meaning of public space as a place for encounter in this time, and how will it redefine notions such as individuality and collectivity? Which experiences and insights do we carry with us when we return to the old normal? This special edition of The School of Narrative Dance shows the importance of Senatore’s practice, rooted in the possibility of creating new, unique communities, and in the potential of art as an instrument of exchange, connection, and cultural growth.

When it became clear that the virus would affect our lives for longer than expected, instead of postponing the project, we decided to take up the challenge and work directly with the situation of the pandemic. The dialogue with potential participants started in online environments, after which it gradually moved to the public domain. After the first digital conversations, the project took on physical form in on-site workshops – where together we explored movement in times where maintaining distance is the dominant motive. Unfortunately, Marinella Senatore was unable to come to the Netherlands to facilitate the workshops due to the strict Italian lockdown. Senatore introduced us to ESPZ, the choreographer-duo Elisa Zuchetti and Nandhan Molinaro, with whom she often collaborates for The School of Narrative Dance because of their jointly developed practice. Marinella Senatore was, despite her physical absence, very involved with the project. She had regular interactions with the participants, sending encouraging voice messages via WhatsApp and arranging online meetings via Zoom or Skype.

The School of Narrative Dance greatly values the active participation of those attending. Everyone is free to participate, regardless of age, background, or degree of (professional) experience. This intention remained central to this Amsterdam edition of The School of Narrative Dance, which is reflected in the variety of its participants. In the end, we worked with eight groups, (The Honeybeez, Curvalicious, Noorderpark in Beweging, Sweet 70, Women Skate the World, Het Wereldhuis, Wazzup Singers en Inhumans Agency), consisting of 60 people in total.

During a November press conference, prime minister Mark Rutte and minister Hugo de Jonge announced new, heightened measures. From that point onward, gathering outside with more than four people was prohibited. Because of this, we decided to record solo performances in people’s homes (25 people welcomed us into their homes), in addition to organizing the group performances. The dynamic between the group performances and solo performances reveals the tension between collectivity and individuality, which has become a more pressing and current issue since the beginning of the crisis. How can we develop new forms of collectivity in a time where individuality is predominant? How can art contribute to this process? We explored these questions by experimenting with other forms of collectivity and social interaction. In the film, different voices come together to form a unified voice in the public domain.

Emancipation is at the heart of the work. Although the groups and individuals developed and performed their pieces separately, each of them did so with the intention of participating in a collective act. Connected at a distance, we have explored the concept and consequences of the ‘new normal’, made a collective statement, and claimed space to have a say in and about the public domain. The initiative stimulated the creative power of groups and individuals. In this modified version of The School of Narrative Dance, the essence of Senatore’s work has remained intact.

In July, several digital meetings took place between the groups and Marinella Senatore, Elisa Zucchetti, and Nandhan Molinaro, facilitated by TAAK. During these one-on-one meetings, the participants and Senatore’s team got to know each other, exchanged stories, and viewed fragments of earlier editions of The School of Narrative Dance. These intimate conversations sparked enthusiasm and cultivated trust between participants. The skills and interests of the participants were also addressed, to be taken into consideration during the workshop preparations.
An example of a topic that frequently recurred during conversation is music. Sound designer and editor Maarten Brijker created several soundtracks for the final film. These soundtracks were developed using music suggested by the participants.

The participating groups decided how much time they were willing and able to invest in the project. Some groups wished to join two workshops, while others preferred to participate in one workshop. In addition, every group committed part of a day to film the resulting performances of the workshop(s) in the public space.

The School of Narrative Dance, Amsterdam

Want to read and see more? 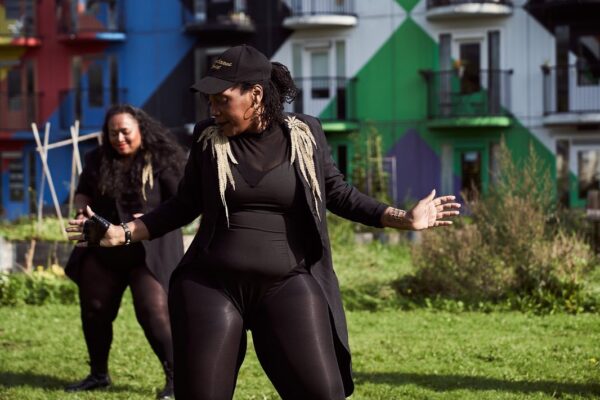 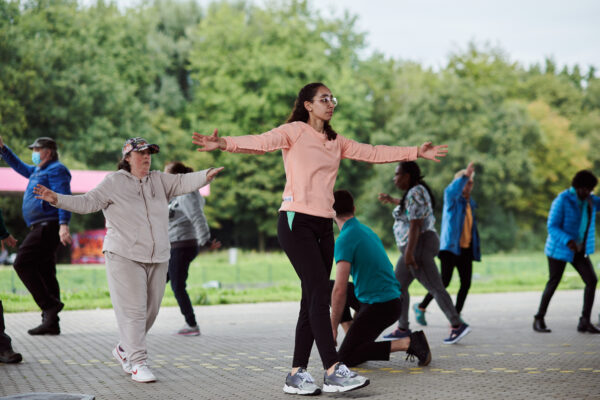 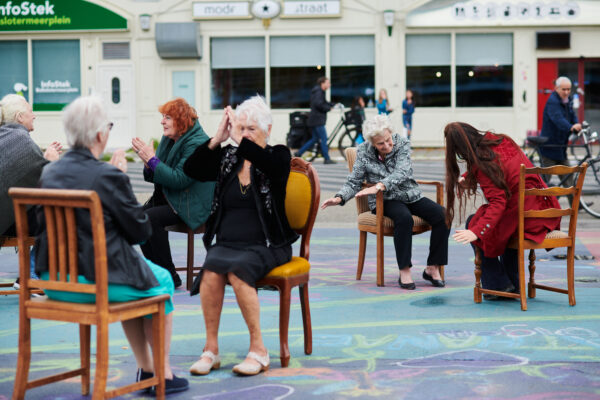