How good to see you all gathered here, around this half sized replica of a fragment of the ruin of the Amsterdam version of London’s Crystal Palace, the Palace of Industry, het Paleis voor Volksvlijt, built in de 1860s, that burned down in April 1929.

James Beckett, with utmost care and eye for detail, has studied plans and drawings of the building and the photographs of the smoking ruins, to make this reconstruction, using materials and techniques of the 21st century, like weather resistant MDF, laser cutting, modern aluminium alloy, powder coating, computer software, and good old Indian Ink.

Why is it erected here? What does it mean? Well, as with all art, anything you like. Since James has asked me to say whatever I like to say, I suggest we begin by noting that he did not build a replica of the glorious Palace of Industry that was the pride of the city of Amsterdam for more than half a century. Its largest building, dwarfing the renowned world wonder of the Golden Age, City Hall. Its glass dome could be seen glittering above the rooftops from afar, as travellers approached the city by boat, train, steam tram or horse and carriage.

He chose to present us with a sculpture that takes us back to the morning after the fire that destroyed it. The moment of loss, of bafflement and confusion over the disappearance of this huge symbol of progress, technology, entrepreneurship, civic unity and pride. Sic transit gloria mundi. Thus fades worldly glory.

And he presents it here, at Mahler Plaza, the heart of the designated international business district of Amsterdam, still under construction. At the foot of these hi-tech towers. Please remember how the revolution of building in cast iron and glass of the 1850s and 60s was the overture to modernisms aesthetic of quick, economic and modular design, expanding scale and functionality for the masses.  Factory made, prefab elements added up to a grand cathedral for optimism and growth. Note the rhyme with these modern buildings.

The Palace of Industry was the brain child of Samuel Sarphati, the son of a Jewish tobacco merchant who became a medical doctor and married into the Amsterdam elite. As a general practitioner he was pained to see the appalling living conditions of the mass of inhabitants of Amsterdam. At the time, waste removal was not considered a government task, and Sarphati bought the licence to start a company that removed waste from the city, which greatly improved public hygiene.

In another initiative we would call an example of disruptive and social entrepreneurship, he broke the cartel of wheat merchants and bakers in the city and started a bread factory that produced wholesome bread at far lower prices to improve the diet of the poor. Often frustrated by the circles of power, who in his eyes were closing their eyes for the opportunities of change and progress, and were provincial in their thinking and nostalgic for former glory, Sarphati was inspired by his visit to the Great Imperial Exhibition in London in 1851 where he visited Crystal Palace. More than ten years later Het Paleis voor Volksvlijt was opened, at Frederiksplein, an Amsterdam version of the same type of building.

It housed not only fairs and exhibitions of new industrial technologies, inventions and exotic luxury goods, it also housed the biggest and most advanced organ of the Netherlands, it had its own orchestra, there were art exhibitions and concerts, theatre and variety shows. It was a showcase for local and national novelties and a stage for international contacts of all sorts. Progress was not just a technological and economic idea; it was intimately linked to culture, education and social events. To the life of the people of Amsterdam.

Looking up from this compact re-enactment of an historical moment of loss we see the offices of the financial sector, law firms and technology companies, we find ourselves in an international enclave, a settlement of a global network of money, data, services and contacts. I like to think of this sculpture not as a sign of mourning or nostalgia, but as a veiled, ironic gesture coming from the other Amsterdam, the present city of Amsterdam, equally ambitious, diverse, intelligent and innovative that is not directly linked to this international economic might, a gesture that tries to make contact. A 3d graffiti, a mysterious tag on the pavement of Mahler plaza.

The old, cast iron and glass Palace of Industry is gone and was an institution of its time. But re-enacting its destruction and disappearance here, could also be seen as the expression of a longing for a rekindling of an idea of progress that succeeds in connecting technical and economic innovation and growth to social, cultural, local, human values. How to fill that empty spot? You could say, with a 21st century equivalent for what the old Palace was built for. What will that look like? What would it have to do and to offer?

Finding out together might start with a sense of history, by remembering the frailty of our success and the limitations of our ideals and objectives, by looking at this elegant ruin, here. Let’s meet at this Palace Ruin from time to time, to discuss this or watch the speakers and musicians using it as a stage. A meeting point for global and local Amsterdammers, this artwork can be their hangout with a spectacular point of view, stretching from 1865 to 2065.

I sincerely hope we manage to build this future Palace of Popular Industry before the time these towers crumble, or are being abandoned and torn down. Imagining the future always brings along a sense of joyful anticipation, and there is nothing that captures this childish emotion better than collectively watching the lighting of a fuse, so that is how I would like to celebrate the new presence of James Beckett’s Palace Ruin at the Zuidas. 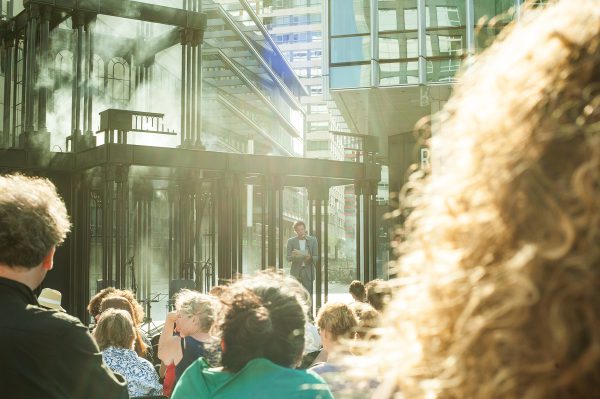 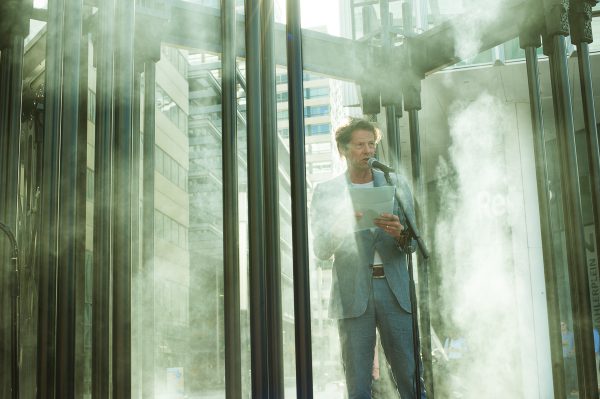