Play Back Talk Back #2

TAAK and Van Abbemuseum cordially invite you to the screening of I is Somebody Else by Julieta Garcia Vazquez at Van Abbemuseum in Eindhoven on Thursday 1 February 2018, followed by an artist talk and debate.

Artist Julieta Garcia Vazquez worked 5 years in Woensel-West, from 2012. The area was about to be demolished at the time, which would mean not only tearing down houses and buildings but also (immaterial) memories of the war, reconstruction, crisis, immigration and social housing. Together with the inhabitants of the district, the Van Abbemuseum, social housing corporation Trudo and TAAK, Julieta Garcia Vazquez started a journey to explore the impact of gentrification in the urban area in relation to heritage and identity.

Julieta Garcia Vazquez produced a film about the project: I is Somebody Else. It has become a personal document about the disappearance and resurrection of a whole district. In that process different interventions took place; from the collective creation of a typical living room in Woensel to the conservation of a whole house. We will screen the film on Thursday night 1 February, and Julieta will be in the museum to tell more about her work.

After the film screening, Vittoria Caradonna (expert on gentrification and heritage) will give a statement, followed by a discussion. Moderator is Steven ten Thije (Van Abbemuseum).

Julieta Garcia Vazquez's film will also be on show in the exhibition The Making of Modern Art from 1 February.

Programme
6.15 pm: Entrance and welcome in the 'Werksalon', drinks and bites
7.00 pm: screening of the film and short introduction by artist Julieta Garcia Vazquez
7.20 pm: Short presentation by Vittoria Caradonna (expert on gentrification and heritage) followed by a discussion moderated by Steven ten Thije (curator at the Van Abbemuseum)
20.15 hrs: End, possibility to view artwork in exhibition

Registration for this event is not necessary. A valid museum ticket gives free entrance to the screening and artist talk.
Location: Van Abbemuseum, Bilderdijklaan 10, 5611 NH Eindhoven

About the speakers
Julieta García Vazquez, who lives and works in Buenos Aires, makes artworks that revolve around the creation of collective narratives based on the study of different models of collaboration, particular to a given context.

Vittoria Caradonna is a PhD candidate at the Amsterdam School for Heritage, Memory and Material culture of the University of Amsterdam. Her research focuses on the intersections and uncomfortable intimacies between heritage production, memory politics and representation in the context of European historic cities.

Steven ten Thije is curator at the Van Abbemuseum. 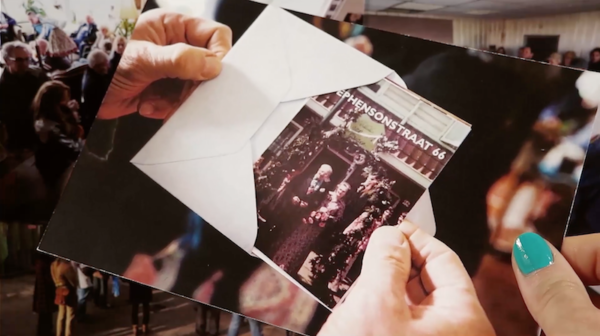