On three pile foundations and a complex construction such as used in bridge and boat construction, Gramsma poured some 8000 cubic meters of agricultural and Zuiderzee soil. In this heap, he made a large opening, which was then covered with a layer of shotcrete. Gramsma then removed all the soil to ground level, leaving this concrete cast, mixed with remnants of the Zuiderzee sea floor.

Riff, PD#18245 is a cast of the mark made by Gramsma in the Flevo polder soil; as such, it reflects the reclamation and artificiality of the polder. Gramsma’s newly formed landscape, which rests on piles like a building, provides shelter to animals and mosses. Visitors can use the stairs and let their gaze wander from above over the old country at Elburg and the new manmade landscape with its dikes, roads and ditches. 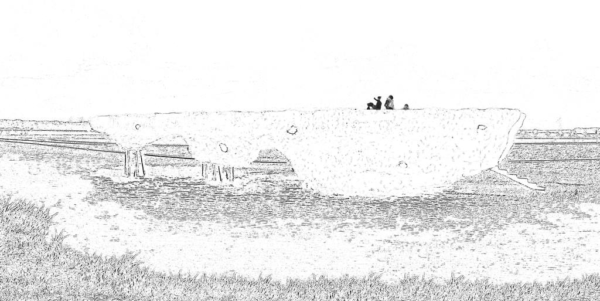