A Hole and a Wall

Made possible partly by: Mondriaan Fonds

Being incarcerated involves isolation, confinement, and surveillance at the margins of society. Detainees live in separate societies, concealed from the horizon of the rest of the world. With programmes filled with activities, rehabilitation, and education, an attempt is made to socialize prisoners and prepare them for their return to ‘real’ society. But is that possible in an institution that is isolated from the outside, and where deprivation of liberty and seclusion serve as punishment?

The project A Hole and A Wall, initiated by TAAK, investigates how we might socialize the prison system itself. Together with artists, thinkers, (ex-)detainees, and professionals from criminal law and the prison system, we envision the prison of the future.

Interestingly, the construction of this detention center did not trigger a public conversation about the function of prison sentences. This is a striking fact, considering the lively discussion that arose about the treatment of detainees in the seventies, when the Bijlmerbajes was constructed.. Because of this, TAAK feels compelled to put the subject ‘detention’ and the surrounding social issues back on the public agenda. Since 2016, we are mapping this issue using research, debates, presentations, and art projects, as well as thinking about alternatives for the current system.

Within this programme, several projects are being developed. Artist Lucas Lenglet and architecture critic Arjen Oosterman have performed visual research into ‘the wall’, questioning architectural systems of inclusion and exclusion. Using portraits of prison walls, sketches, scale models, and a publication, Lenglet explores ways to give shape to the world behind prison walls. In 2018, the results of this research were presented in the exhibition ‘A negative space’ in New Dakota in Amsterdam.

Anthropologist and political philosopher Femke Kaulingfreks does research with detainees into their vision of the prison of the future. How can we create a prison that remains open to society? Artist Juliacks is involved in this project to give visual expression to the research. Earlier, she made artworks inspired by the Tuchthuis in Haarlem, where the first prison rebellion of the Netherlands took place in 1612.

Veronique Achoui, founder and project manager of Stichting CHAINS does research with family members and partners of detainees. What do they think about the choices their loved ones made and the way society treats them?

Together with Stichting Nieuwe Helden, we investigate how their app The Village could be used to bring a prison with its inhabitants to life. This theatrical, interactive app already guided visitors of the Over ‘t IJ Festival through stories across Amsterdam Noord. Now, we view the prison as part of the city and give the participant a glimpse of the detainee's world via his or her smartphone.

At different moments in 2018 and 2019, the results of these projects were presented, culminating in 2019 with the manifestation A Hole in a Wall. 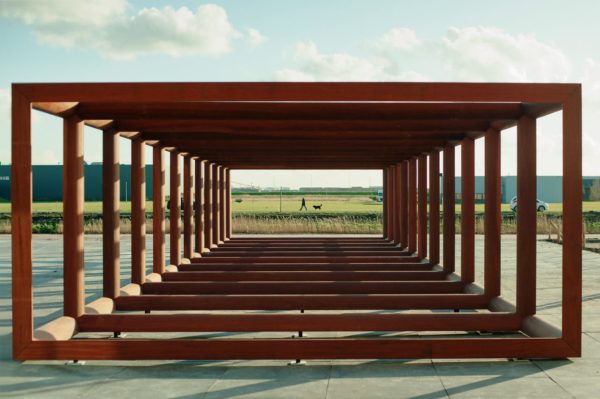