The house is me

But then there was a neighbourhood who saved the artist.

A Neighbourhood that threw itself as the guardian of the project.

This is a story of a social residential house that escaped demolition with the aim of being preserved and displaced brick by brick to the local museum. But facing the impossibility of its displacement, Garcia Vazquez and the inhabitants of the neighborhood decided to dismantle the house and preserve it in the shape of permanent and personal architectonic  designs, which were added to their own houses.

It all started with the aim of preserving the memories of the neighborhood. It ends up as a series of new stories about special people. The house that was doomed to be demolished has been transformed into a monument for the future of today's social ecology in Woensel-West.

To close the project and to inaugurate the works of art, a festive opening will take place on the 8th of July 2016. On this day a unique tour will take place around all interventions in the district. 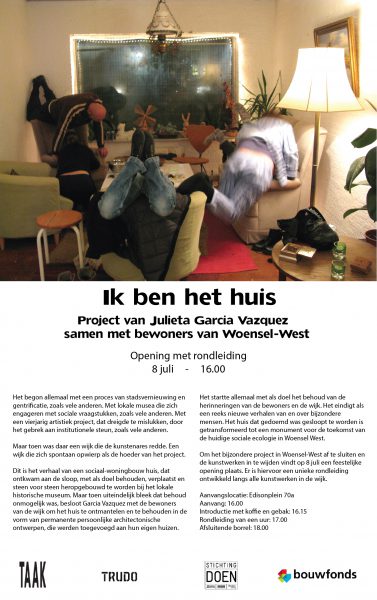