Michel Foucault was born on October 15th, 1926 in Poitiers, France. On the same day, in 2020, the internet was celebrating his legacy by transforming him for the umpteenth time into a meme and dispersing bite-sized nuggets of his knowledge across the digital realm. With lockdowns, closed borders, working from home, and masks all over 2020 has been the ultimate Foucault year.

That same day, October 15th, in the evening, I began to have a sore throat and a slight cough.

“Any doctor here?
I’m an undergrad applicant.
He needs to go to hospital.
Is it surprising that hospitals resemble factories, schools, barracks, which all resemble prisons?
Holy shit! Is that a motherfucking FOUCAULT reference?
Foucault, Michel. “Discipline and Punish”. Trans. Alan Sheridan. Vintage books. 1977.”

I decided to call the corona test system after I had unsuccessfully struggled to book an appointment online. At this moment there are 6 testing facilities in the Amsterdam metropolitan area. A new one had opened just the week before in Diemen, aiming to serve the people from Diemen and Zuid Oost. Proximity is key, especially since one is advised to not make use of public transport when going to a testing location.

I navigated the test setup website, logged in with my government-issued identification details, was asked if I own a car, and realized there was no option for me to say I can’t even drive, ended up on the page on which I could add my zip code and choose a testing facility next to home. The postcode field only allowed me to input numbers and no letters, I figured letters wouldn’t have been necessary anyway and I pressed ahead. The options that popped up were Lelystad (a 38-minute drive and a brisk 11 hours walk), Zwaag (in Hoorn, 51 km, 9 hours, and 48 minutes of walking), and Leiden (38km and 9 and a half hours of walking). It’s a small country, what can I say! However, even a small country is a bit of a challenge for a non-driver.

Puzzled I decided to call in, rather than rely on the website, and luckily I was swiftly redirected to the test location at the RAI in Amsterdam Zuid and managed to get an appointment for the morning of the following day.

After which I dived into Susan Sontag’s “Illness as Metaphor”, since it’s been sitting in my reading list for years, and what better time to dwell on illness than when being sick.

The book’s premise deals with how the image of illness is shaped in its collective understanding. There are two examples in the book: tuberculosis and cancer. And the approach is one of compare and contrast: how the illness is perceived in the body, what the appearance of the sick person is, how the diagnosis is set, what habits come along with the illness, how perceptions change in time.

What united the two diseases — TB and cancer — was their secret nature when they were first discovered. As with most diseases, it took time until the symptoms of the illnesses could be accurately charted and later on tackled, which made their initial surfacing a matter of mystery. Though cancer differs from TB through the fact that it's not an infectious disease, its still hidden nature made people react to it as if it were contagious. There’s a restraint on even naming the disease, as if once named the disease can take over.

Funny enough there’s the tendency in Dutch to focus curse words on diseases which have either been or still currently are, a threat. While I’m used to words naming genitalia, or family members, or any combination of the two, as well as directly death and sex acts within profanity in the Romanian linguistic landscape, the Dutch tend to use cholera, leprosy, typhus, tuberculosis, and cancer as go to curse words. So “get cancer” and “cancer sufferer”, as well as “TB sufferer” are insults, though there doesn’t seem to be much humor associated with them, rather just downright ill will. At the same time, I tend to think, with that also comes a much more direct acceptance of death.

To go back to Susan Sontag, she wrote about how: TB is fast. Cancer grows slow. TB is a disease of poverty and deprivation. Cancer is a disease associated with access and middle-class comforts. But impressions change as TB gets an air of romanticism added to it through its association with poets and other tragic figures. While cancer is now both low and middle and upper class. But it’s the lower class for which it’s more often deadly. TB is a fast death. Cancer is slow and painful. TB is the body spiritualized — lungs, breath. Cancer ends up taking over the embarrassing body — the colon, bladder, rectum, breasts, cervix, prostate, testicles. TB is a sickening feeling, cancer is feeling repressed.

The most interesting take in ”Illness as Metaphor” has less to do with individual experience of illness, but more with a collective understanding of its economic parallels, and I quote:

What about corona? At the time of Sontag’s writing (1978) “Diseases understood to be simply epidemic have become less useful as metaphors as evidenced by the near-total historical amnesia about the influenza pandemic of 1918-19 in which more people died then in the four years of World War I.”

Given that we’re deep into a global pandemic, a follow-up to “Illness as Metaphor” is in order. What lessons does the corona pandemic offer as a metaphor concerning the present economic system and its entanglements to the environment? How does rampant neoliberal individualism work against our getting better? What is the impact of the global spread of the disease on our understanding of the way we relate to each other?

O Susan, where art thou?

The morning of the test I felt my taste buds stiffen up. They were like bits of popcorn. Though I still had most of my smell and taste.

My testing experience was mixed. I arrived at the RAI around 11:00 AM and was one of several people parking their bikes in front of entrance F. Normally there’s an expectation of there being long lines, or at the very least the facility is prepped with that in mind, but the waiting times amounted to only a few minutes.

Good news: the Netherlands took its sweet time in implementing fast testing — shortening the time one can get their results in — but now fast testing is almost here. When stepping into the testing facility I was greeted by an elderly man handing me a form, to fill out in case like to be a test subject in a trial of fast testing. I was very eager to take part. Pens and time to read the form were granted to me one level up as I was waiting to be funneled into the testing setup. It only took the passing of the 8,000 positive cases per day threshold to get us to a point where fast testing stepped from the realm of fiction into reality.

Bad news: the regular corona test (and by regular I mean results back in around 48 hours) that I was subjected to was comprised of two steps: a thin cotton swap reaching in my throat and touching my tonsils, thereby proving I have an amazing gag reflex, and a thicker swab reaching in my nose and touching what I can only define as the seat of consciousness. Or some part of me that hurt immediately and made me crunch up some tears. Now, the fast-test was a separate thing altogether. A new, and this time thicker swab, was meant to go even deeper into my nose. Safe to say it never made it through. I failed the bloody quick test! The technician operating the test decided to stop once he had made my nose bleed and we mutually agreed that was the end of it.

Good news again: any of the pain encountered, from choking, crying, bleeding, was only temporary. 10 minutes after the test I was back to my sniffly ways and on my way back home.

Bad, but also expected news: The testing facility did most certainly resemble a cold and bureaucratic hellhole, though I can only guess if Foucault would have undergone a COVID test, it would have only confirmed his theories and made him sublimely happy.

I woke up at 2 AM to pee and felt like someone just sat on my chest. There was a feeling of extreme compression. I could breathe but encountered resistance no matter which side I tried to go back to sleep on. I took deeper breaths in. I eventually fell asleep and resurfaced on the other end of the night.

Later on, I watched the Instagram live of a friend. She had been waiting for her test results for 67 hours. Didn’t sound particularly promising so I decided to add to my own experience of dread and I began reading on what is defined as “long covid”: which is a series of symptoms pertaining to different syndromes rather than just one. People seem to be experiencing symptoms months after they got infected. The symptoms range from fatigue, lasting organ damage, difficulty speaking or swallowing, depression, PTSD, and relapses. Age is a factor in all this, it does get worse as one gets older, but it seems that people 18 years of age and up have been subjected to these symptoms to varying degrees.

I’m called four times one after the other by the health services office, but of course all calls miss me because my phone is set to silent and I perfectly exemplify my age group — I do not call, I text. But the Dutch health service does not text, they call.

Luckily the website which failed to help me book a test is useful in allowing me to find out my results. It has a separate section, also accessible by government ID, which lists in a very succinct manner — either positive or negative — the result of the test.

I pass this one.

But over the next days, as a country, we pass the 10,000 cases per day mark. That’s almost 10 times more cases than in spring. Deaths are down, but lack of care is up. And under these circumstances, succeeding individually is nothing if we’re failing as a collective.

As an end note: while writing this text, navigating talk of illness and death, I inevitably had to also research the causes of death of Michel Foucault and Susan Sontag. It seems life is never too far from work in this case, as Sontag passed away on December 28, 2004 in New York due to a variation on the theme of cancer - leukaemia. Michel Foucault on the other hand died on June 25th, 1984, in Paris. His death was AIDS related. Another epidemic which was incredibly mismanaged on a global scale. He became the first public figure in France to die from complications of the disease and the fact was only publicly communicated on the second anniversary of his death. A reminder that the personal is political. 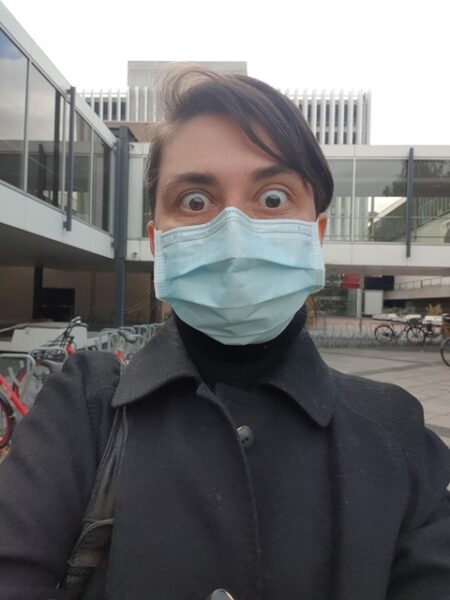