The research platform Heterotropics is proud to announce the première of a new performance by Colombian artists Milena Bonilla and Luisa Ungar at the Rijksmuseum in Amsterdam. For Heterotropics #3, Milena Bonilla and Luisa Ungar have been invited to develop a new version of their lecture performance 'Pavilion'. Conceived as a site-specific intervention, the performance tackles the legacy of 'The International Colonial and Export Exhibition' (‘Internationale Koloniale en Uitvoerhandel Tentoonstelling’) that took place in Amsterdam in 1883.

The exhibition, the first international exposition with an official colonial theme, was organized in what is now Museumplein and on the ground floor of the Rijksmuseum – at the time under construction. Besides showing artifacts from the colonies, entire native dwellings from overseas were erected and inhabited by indigenous peoples, treating visitors to an encounter with the exotic. Allegedly, it was the great success of the fair –which attracted approximately 1 million visitors– that prompted the development of the area into the main cultural hub of the city, suggesting a continuity between colonial exhibitions and the establishment of modern museums.

'Pavilion' explores the traces left by a witness of the 'Internationale Koloniale en Uitvoerhandel Tentoonstelling' on the sites of its historical materialization. Looking into images from the exhibition, the artists elaborate on the relationship between specific documents, objects and scenarios that this observer was reflecting upon while visiting the show. Blending archival material and fiction, this lecture performance follows the specters of colonial spectacles in a short-circuit between past and present.

'Pavilion' is a Heterotropics commission and forms a part of the artists’ ongoing joint investigation of the entangled genealogy of human zoos, colonial shows and museum displays.

Heterotropics is a curatorial and research platform initiated in Amsterdam by Sara Giannini and organized in collaboration with TAAK.

Milena Bonilla (b. Bogota, Colombia) graduated in visual arts at the Universidad Jorge Tadeo Lozano in Bogota, Colombia, in 2000, and followed a post-academic course at the Rijksakademie van beeldende kunsten in Amsterdam, the Netherlands, in 2009-2010. Her current practice involves explorations on knowledge interpreted as a work force, and Nature as an entity colonized by language, consumed in a massive scale through images. The artist uses a variety of media in her production including installations, video, drawing, text, public interventions and photography. She currently lives and works in Amsterdam and has been making collaborative work with Luisa Ungar since 2013. Her work has been shown and performed in different international venues, including The Mistake Room, Los Angeles Ca.; Centro de Arte Dos de Mayo, Madrid; Rong Wrong, Amsterdam; The Photographer’s Gallery and the International Institute of Visual Arts in London; Witte de With in Rotterdam; Sørlandets Kunstmuseum in Kristiansand (Norway) and Kunsternes Hus in Oslo; Konstall C in Stockholm; Marrakech and Shangai Biennial’s parallel projects, and the 12th. Istanbul, 10th. Havana and 3rd. Bucharest Biennials.

Luisa Ungar (b. Bogota, Colombia) studied visual arts in Bogotá, and has an MFA from Sandberg Institute, Amsterdam. She is currently a guest resident at AirAntwerp, Belgium. Her recent work deals with narratives involving animality and the non- human in colonial circuits. Looking at mechanisms that question ways in which history is constructed, she often seeks to connect archived or academic material with everyday popular use, unveling the role of the expert by making room for improvisation, association, gossip and chaos. Her varied projects range from zoo visit guides to educational projects, using performance, drawing and text. Her work has been shown and performed at different venues such as Mercosul Biennial in Porto Alegre; Centro de Arte Dos de Mayo, Madrid; Marrakech Biennial Parallel project; Museo de arte Banco de República Bogotá; Rong Wrong, Amsterdam; Festival de Performance de Cali; Spring Workshop, Hong Kong; Bienal Sur, Rosario. She has been co-editor of publication projects such as DISDISDIS (On vampires and other forms of conviviality), and Proyecto Asterisco. She has been a resident at Gasworks, TRain Residency in London; RESò, Italy and Maebashi Arts Center, Japan. Since 2013 she has been making collaborative work with Milena Bonilla. 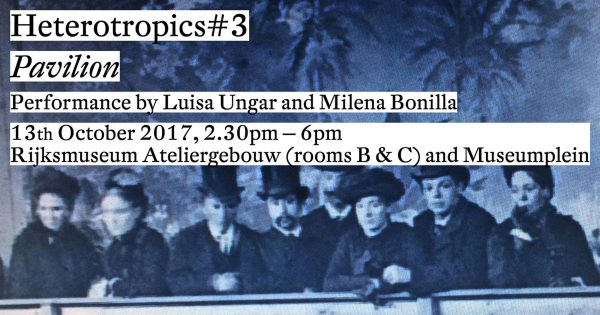