I entered 2021 with a bit more thrill than expected. My partner traveled across the border for work for the first time in months. Since procedures changed and a lockdown was imposed, even more strict than the one we had in March in the Netherlands, he needed to get a fast test in the country of destination. That country happened to be Germany. So he arrived in Münster, took the fast test, and got a positive. This was surprising given that we’ve been one another’s social bubble since the pre-holiday lockdown, and our social life as a whole became almost nonexistent.

Nevertheless, I had to let a friend know that she might be in trouble. I got to feel a little bit like a plague rat again. And I also couldn’t get tested. I called the test line in Amsterdam and was told unless his fast test is certified by a solid PCR test I might as well just quarantine for five days and wait for symptoms.

Fast tests have a higher rate of failure, so neither one of us was truly worried, but even so, I decided to order my groceries online and set myself up to wait for news on a real test from my partner’s side, and I fell down a rabbit hole of news items, historical moments, books that I left unread in 2020, podcasts and online lectures. Lockdown felt like acceptance this time.

Garden centers closed, museums closed, theaters closed, brothels closed, tattoo parlors closed, saunas closed, swimming pools closed, zoos closed, gyms closed, and as far as visits were concerned, one got to have two people over to visit per day, and three for Christmas.

Quarantine felt like second nature. By now I glided across each layer of existence with ease – capable of jumping from denial, straight on to acceptance, crumpling anger, bargaining and depression, like one would crumple a sheet of paper and dispose of it with a light toss.

I asked myself: where was the world this time around? Where had it been during the past year?

“Loungewear, workout equipment, robot vacuums, and vibrators are some of the products that sold well this year (2020).”[1]

By December 2020, my shopping geared newsletters had figured it out. In each there was a large block of text highlighted in red which said:

They rightfully framed the mood of the season:

“Keep it casual: stay cozy this winter with our collection of versatile and comfortable loungewear staples designed for life in and out of the house.

November 17th, 2020, marked the first anniversary of the discovery of ‘Patient 1’ of COVID-19, an elderly gentleman, 55 years of age, from the Hubei province in Wuhan, China.[2]

Despite it all, one year in, there didn’t seem to be an economic crisis looming large. And by despite it all, I mean despite the corona regulation protests.

“Last March, when Covid-19 infected the world economy, many observers feared that emerging markets and developing countries would suffer the most, financially and otherwise. Economically, they relied on commodity exports, remittances, and tourism, all of which fell through the floor with the pandemic. There was every reason to expect a tsunami of financial crises and debt defaults. The tsunami never arrived. Just six countries – Argentina, Ecuador, Belize, Lebanon, Suriname, and Zambia – have defaulted on their sovereign debt, and only the first two have restructured their debts.”[3]

“In August, Zoom went down just as many students were beginning the school year at home. And in September, Microsoft services had an outage that lasted for five hours.”[4]

Around midday, December 14th, central European time, all Google services went down for users worldwide: “Google applications including YouTube, email and Docs have suffered a rare service outage, with users unable to access many of the company’s services.”[5]

“three controversial bills meant to open up the agricultural sector to large corporate and financial interests. Farmers fear the legislation is a prelude to the government dismantling the long-standing system of minimum support prices (MSP), which provide some stability to farmers by setting the price at which the government buys a variety of crops.”[7]

Using clear communication, repetition, pooled testing, and drone technology, the country has managed since the beginning of the crisis to keep the COVID spread under control.[8]

If the COVID pandemic has proven anything it’s that the coverage of it has been incredibly steeped in prejudice, favoring a so-called “developed nation” narrative over the narrative of so-called “developing nations”. The numbers though show a completely different picture. The reality is that “western media cannot write western failure”[10], even while it’s living through it.

January 6th: “The 24-hour death toll reached 3,865 on Wednesday, the worst figure anywhere in the world during the Covid pandemic.”[11] That adds to an overall 350,000 deaths registered in the US so far.

The US was also blessed with a coup on January 6th as Trump rallied his supporters and ultimately encouraged them to storm the Capitol building. Police barely intervened, the rioters were white after all, there were at least 52 arrests by the end of the day, there were 5 people dead – one shot while storming the building, another 4 dead as a result of medical emergencies, one of them a Capitol policeman. The Capitol was trashed, looted, then evacuated. Trump ended in social media jail. For the time being. In a truly unprecedented move his Twitter account was suspended, then banned. Starting January 8th there were talks of Facebook, Google, Spotify, Snapchat, Instagram, Shopify, Reddit, Twitch, YouTube, TikTok and Pinterest having banned or restricted the president.

Too little too late.

January 7th: “Japan has declared a one-month state of emergency in the capital, Tokyo, and three neighboring prefectures to stem the spread of coronavirus infections, as new daily cases surged to a record of more than 7,000, media reported. The government said the emergency would run from 8th January to 7th February in Tokyo and Saitama, Kanagawa and Chiba prefectures, covering about 30% of the country’s population.”[12]

On December 6th Romania elected its new parliament. For the first time in a long time, the country welcomed a right wing party joining the ranks of active political factions. The party’s name is AUR (Alliance for the Unity of Romanians, which as an acronym that stands for “gold”). The party seems to be relying on overall discontent and the lack of a strong left leaning movement in the country, and also on, by now, decades of exploitation of a diaspora that has seen its limits reached during the Corona crisis.[13]

“When, on Dec 2nd, 2020, England lifted its lockdown and moved back into a three-level tiered restrictions system, cases continued to increase sharply in Kent and then rapidly in Greater London and other parts of the southeast. And despite the approval of two vaccines in recent weeks, the UK now faces a race against time to vaccinate as many vulnerable and elderly people as possible.

The reason: a new variant of SARS-CoV-2, which various modeling exercises have estimated to be up to 70% more transmissible than the previously circulating form of the virus. In September 2020, this variant represented just one in four new diagnoses of COVID-19, whereas, by mid-December, this had increased to almost two-thirds of new cases in London.”[14]

The new COVID variant had a direct impact not just on increasing the number of cases, but also on trade: “As many as 10,000 lorries from across Europe were stuck after France temporarily closed its border over fears of a fast-spreading coronavirus variant, reopening only to those drivers who could show a negative coronavirus test.”[15]

On December 24th the Brexit bill was finally approved.[16] The UK managed to step into 2021 evermore an island.

In Amsterdam there was some good news to mention:

“Several institutions that threatened to fall victim to the Amsterdam corona cutbacks are nevertheless spared. The cutbacks to the library, the Amsterdamse Bostheater, and Museum Het Schip have been discontinued. (…) Also, cutbacks on new breeding grounds (broedplaatsen) for artists have been scrapped and money has been released for food initiatives in neighborhoods. For homeless people, 100 extra shelters are available this winter, where they can stay around the clock.”[17]

January 5th brought with it the first vaccine shot on Dutch land:

“Sanna Elkadiri (39) from Eindhoven is the first Dutch person to be injected with the Pfizer vaccine against corona at the GGD injection site in Veghel on Wednesday morning between 8.15 and 8.30.”

Sanna works in a nursing home in Boxtel.

As in most cases of firsts, Sanna plays a symbolic role considering that: “Early last month, a survey by NU'91, the professional association of nurses and carers, showed that the willingness to vaccinate among nursing home employees is the lowest of all healthcare professionals.”[18]

We’re late and we’re reluctant, but vaccines are underway: “The Netherlands is set to begin vaccinating people during the second week of January at three locations in the regions of Rotterdam, Utrecht, and Hart voor Brabant. That will expand to 25 locations by January 18.”[19]

I zoom in and out of the media landscape. My body is restless, my mind the same, and I see both potential in my self-imposed quarantine and reach the depths of desperation, sometimes in the span of the same hour. It’s hard to keep track.

In his essay “Dreaming in Code” Rob Lucas pointed out how working rhythms lead to an overall breakdown. When overwhelmed – and overwhelmed we were before the pandemic, though it’s hard now to truly remember that fact – our bodies choose to break down, to do us a favor and interrupt the flow. It gets one thinking that maybe, just maybe, all we needed was to be collectively ill for a while.

For: “It is only when sickness comes, and I am rendered involuntarily incapable of work, that I really regain any extra time “for myself”. It is a strange thing to rejoice at the onset of the flu with the thought that, in the haze of convalescence, one may finally be able to catch up on a few things that have been pushed aside by work. Here illness indeed appears a “weapon”, but one that fights its own battle, not wielded by the erstwhile aggressor.”[20]

Rob Lucas wrote this in 2010. Little did he know. From the jittery comfort of 2021 I can allow myself to state that there’s strength in letting illness wash over us, in processing its lessons and moving on from there. I now know that illness has allowed me to rediscover the world and has allowed the world to rediscover itself.

With that in mind I fix myself a cup of coffee and drag my body to the working table. Even as illness continues, I know also that it will have an end. I remove the wooden cover off my tarot pack’s enclosure, mix the cards up, splay them on the table, and choose three: past, present, and future.

Past: Three of Rods (reversed)

FOUR STREAMS OF WATER spring from a cup and fall into a pond where water lilies float.

I fold the cards back into the pack and wonder to myself: so, where do we go from here? 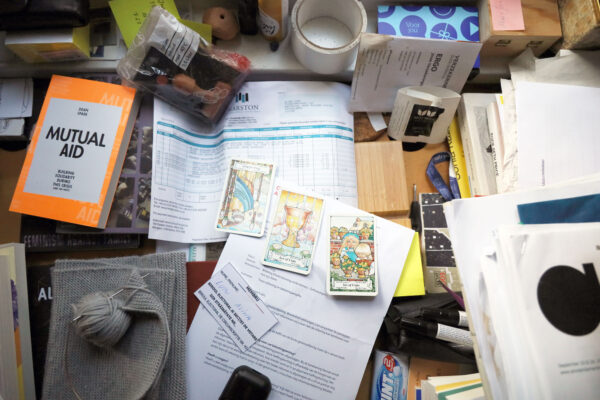 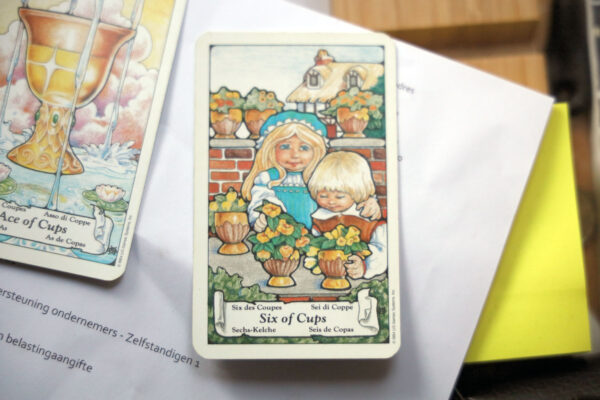